Wichita's use and maintenance of the Wichita Gang List is discriminatory and wrong.
​We're taking action. 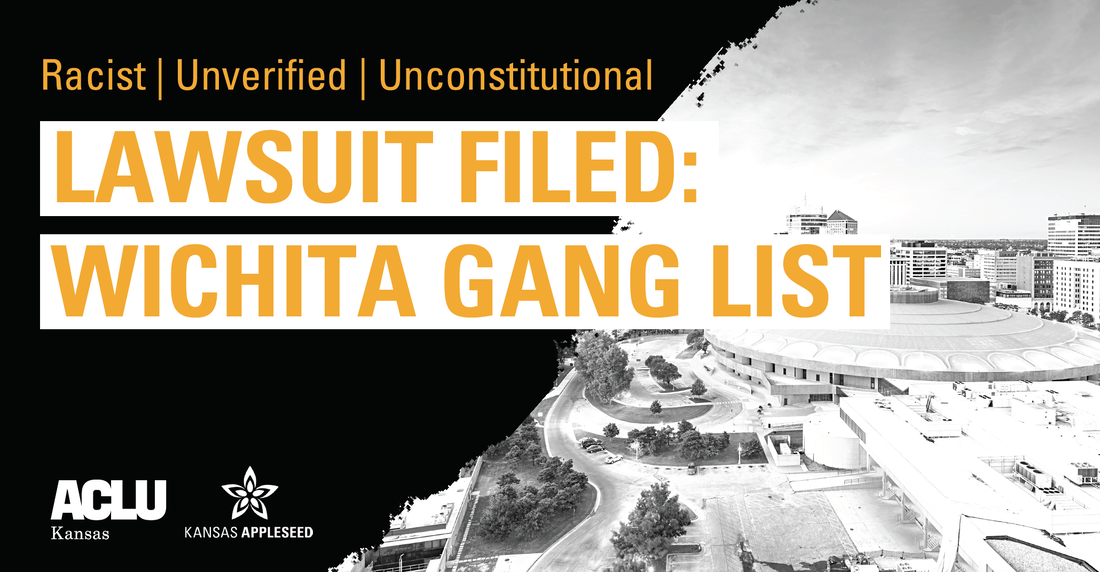 WICHITA, KS – Today, the ACLU of Kansas and Kansas Appleseed Center for Law and Justice filed a class action lawsuit against the City of Wichita, on behalf of Kansans who have been unlawfully targeted and harmed by the Wichita Police Department’s use of an unconstitutional Gang List.

“For too long, Black and Latinx Wichita community members have been surveilled, harassed and punished–without notice and without cause–because they meet arbitrary criteria that allows WPD to label them a gang member,” Sharon Brett, ACLU of Kansas legal director, said. “WPD should not be allowed to target people for their innocent, constitutionally protected activity under the guise of public safety.”

Members of the Wichita community do not have to commit or even be charged with a criminal offense to be placed on the Gang List. According to the complaint, the criteria to be included in the List–which come from state law–are “vague and broad and encompass a wide range of innocuous, innocent, and constitutionally protected behavior.” By statute and WPD policy, the color of clothing you wear, where you hang out or who you are photographed with could all result in WPD placing you on the Gang List.

“All Kansans deserve to participate fully in their communities under equal protection of the law,” Teresa Woody, Kansas Appleseed litigation director, said. “The injustice, profiling and disparate outcomes fueled by the Wichita Gang List destroy not only individual lives, but entire communities as well.  It is well past time for the Gang List and the statute that permits it to be dismantled.”

Once on the Gang List, if a person is charged with a crime, they will face higher bond amounts, more severe probation and parole conditions and enhanced sentences. And even those without charges face punishment, including constant surveillance, harassment and discriminatory policing by the WPD.

WPD identifies people as “gang members” and places them on the Gang List without notice or due process. Merely associating with other people on the Gang List can result in being added to the List. The Gang List and the list of places designated as gang territory are not publicly available. There is no way to challenge one’s listing or request an individual’s removal from the List.

People on WPD’s Gang List find it difficult to participate in regular aspects of life, including seeing friends or loved ones. People on the List cannot be seen with other people on the List, or visit certain businesses or neighborhoods that WPD has classified as gang territory.

“I have gotten pulled over so many times with police using the Gang List as an excuse to search my car–never receiving a ticket, but constantly harassed,” Dante Bristow, Progeny youth leader, said.

Progeny, a youth-led organization focused on transforming the juvenile justice system in Kansas, joined the lawsuit because the Gang List impacts its ability to pursue its mission; without knowing who is on the List, members can face serious consequences for associating with one another. Progeny has also had to divert organizational resources to assist those impacted by the Gang List, and members have had to forgo exercising their constitutional rights in hopes of avoiding being placed on the List.

“Having an unverified and inaccessible Gang List speaks volumes about the racial profiling, targeting and harassment of Black and brown people in our community,” Kristen Powell, Progeny youth leader, said. “Racial disparities are the heart of the problem in our criminal legal system, and if we continue to refuse to address lists such as the Gang List, then we are refusing to address the legalized racism in our own community.”

According to the lawsuit, WPD’s use of the Gang List is unconstitutional and violates community members’ First, Fourth and Fourteenth Amendment rights. Attorneys bringing the suit are asking for injunctive and declaratory relief, challenging both Kansas law and WPD policy. Plaintiffs ask that the City of Wichita immediately cease its use of the Gang List and prohibit the operation of a Gang List in the future.

About Kansas Appleseed Center for Law and Justice: Kansas Appleseed is a statewide organization that believes Kansans, working together, can build a state full of thriving, inclusive, and just communities. Kansas Appleseed conducts policy research and analysis and works with communities and partners to understand the root causes of problems and advocate for comprehensive solutions. For more information, visit www.kansasappleseed.org.

Working with the ACLU of Kansas and the Appleseed Center for Law and Justice, law firm Shook, Hardy & Bacon provided pro bono assistance on the complaint.

Have you been directly impacted?

Kansas Appleseed and ACLU Kansas are challenging the use of the Gang List and looking for stories of how individuals have been affected by it.  If you or someone you know have been affected by having your name entered into the Gang List, we'd like to hear your story. Please fill out the form below. All information will be kept confidential unless we contact you and get your permission to share it.