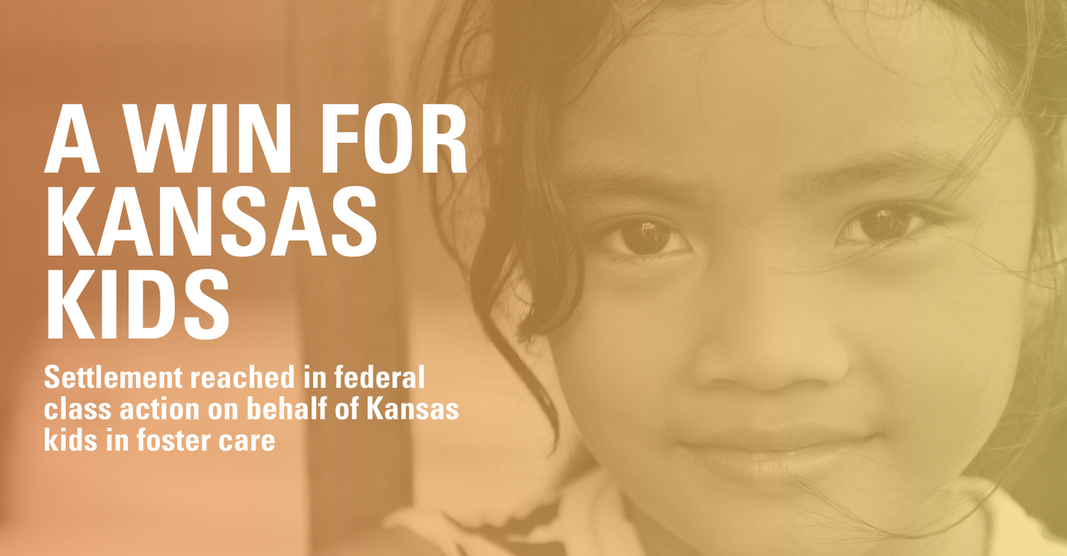 Notice of Settlement:
If you have questions or would like to respond or object to the settlement, please contact fostercaresettlement@kansasappleseed.org.
For Immediate Release
July 8, 2020
For press inquiries: Christina Ostmeyer, costmeyer@kansasappleseed.org; Patricia Guinto, pguinto@youthlaw.org; Camilla Jenkins, cjenkins@childrensrights.org; Josh Epstein, josh.epstein@dlapiper.com

(July 8, 2020 – Kansas City, KS) – Today Kansas officials and attorneys advocating for the rights of over 7,000 children in Kansas foster care agreed to an ambitious settlement plan to transform an overburdened, mismanaged and dangerous foster care system that for years has victimized and traumatized the very Kansas children it is supposed to protect.

The settlement agreement, filed in federal court today, is the result of the class action M.B. v. Howard (originally M.B. v. Colyer) brought in November 2018 against state officials on behalf of the state’s foster children. The plaintiff co-counsel team includes Kansas Appleseed Center for Law and Justice, Kansas City attorney and Child Welfare Law Specialist Lori Burns-Bucklew, the National Center for Youth Law, Children’s Rights, and the global law firm DLA Piper.  Defendants in the settlement include Secretary Laura Howard of the Kansas Departments for Children and Families (DCF) and Aging and Disability Services (KDADS) and Secretary Dr. Lee A. Norman of the Kansas Department of Health and Environment (KDHE).

The settlement, which is subject to review and approval by the federal court in Kansas City, will bring fundamental changes to a child welfare system that has long been in crisis -- subjecting already traumatized children to unprecedented housing instability that renders them essentially homeless, and denying them vital mental health care services.

“This is a moment that took far too long to arrive. But the children of Kansas have finally been heard. We became partners in this suit because it was clear that legal advocacy could bring change when all else had failed. That day has come,” said Teresa Woody, litigation director, Kansas Appleseed Center for Law and Justice.


“I have seen the suffering of too many children and families ill-served and betrayed by the Kansas child welfare system. Today is a victory for the over 7,000 children for whom we filed this lawsuit. The state is on the hook: we now have enforceable, measurable reforms in place that will put an end to the destructive practices that have done so much harm to kids who depend on the system for their safety and well-being,” said attorney and Child Welfare Law Specialist Lori Burns-Bucklew.

A system in crisis

For years, DCF and its contractors have regularly shuttled children back and forth to any available bed, couch, or contractor office that could be found, often 20, -30, -40 or even 50 or 100 times. The vicious cycle can repeat for days, weeks or months. Children often miss school, some run away, and some even fall victim to child sex trafficking. The impact on older youth is particularly acute, leading to bleak outcomes for them when they age out of the system.  Meanwhile, the state has also failed to provide children in foster care with desperately needed mental health screenings and services.

The M.B. v. Howard lawsuit alleged not only that the devastating housing instability crisis imposes emotional and psychological harms and risks of harm on children who were already traumatized upon entry into system, but also that the extreme instability actually causes physical harm to children’s normal brain development. It is widely known and supported in published studies that the chaos imposed by housing instability can negatively affect normal physical brain development, altering children’s ability to form trusting attachments with adults and causing other mental health conditions.

“When we began speaking with Kansas youth, families and advocates about their experiences with the foster care system we were shocked by the intensity of the housing instability they described. We learned that youth were regularly being dropped off at a new foster home night after night without being offered so much as a warm meal or a shower before being picked up the next morning, and that it was not uncommon for a young person to repeat this grueling experience hundreds of times,” said Leecia Welch, senior director, Legal Advocacy and Child Welfare, at the National Center for Youth Law. “For the thousands of youth who essentially experienced state-sanctioned homelessness while in DCF custody, we hope this settlement results in fundamental change.”

The Powerful Stories of Plaintiff Children

The experiences of the plaintiff children named in the case bring to life the impact housing instability and lack of mental health services have had on children while in the care of the Kansas Department of Children and Families (DCF).

“This lawsuit was about a profound lack of accountability over a broken system, and we give real credit to DCF Secretary Laura Howard and other state officials for stepping up, owning the problems and promising to fix them,” said Ira Lustbader, Litigation Director at Children’s Rights. “This Plaintiff team, and a powerful network of local allies, are not going away – this is just the beginning. We will be right there to ensure these changes occur – these kids deserve nothing less.”

“Today, Kansas Appleseed and our fellow advocates are working to confront the unprecedented challenges posed by COVID-19, while continuing to recognize and work to address the systemic racism inherent in the child welfare system. Black children in Kansas are more than twice as likely as white children to be in foster care, consistent with the disproportionate number of Black children in the system nationwide,” said Jami Reever, Kansas Appleseed executive director. “We brought this lawsuit to benefit all children in the Kansas foster care system, but as we implement the promised changes under this lawsuit, we must ensure that they are applied fairly and equitably.”

About Kansas Appleseed: is a statewide organization that believes Kansans, working together, can build a state full of thriving, inclusive, and just communities. Kansas Appleseed conducts policy research and analysis and works with communities and partners to understand the root causes of problems and advocate for comprehensive solutions. For more information, please visit www.kansasappleseed.org.

About Lori Burns-Bucklew: Lori Burns-Bucklew is a Kansas City attorney in private practice. She graduated from the University of Missouri-Kansas City School of Law and began practice in 1984. An accredited Child Welfare Law Specialist, she has represented children and youth; as well as parents, grandparents, and other caregivers for children whose families are subjected to state intervention. She has served as class counsel in several civil rights class action matters on behalf of children in state care. She has trained hundreds of lawyers in the Kansas City Metropolitan region regarding child welfare law and children's issues.

About Children’s Rights: Every day, children are harmed in America’s broken child welfare, juvenile justice, education, and healthcare systems. Through relentless strategic advocacy and legal action, we hold governments accountable for keeping kids safe and healthy. Children’s Rights, a national non-profit organization, has made a lasting impact for hundreds of thousands of vulnerable children. For more information, please visit www.childrensrights.org.

About DLA Piper: DLA Piper is a global law firm with lawyers located in more than 40 countries to help clients with their legal needs around the world. DLA Piper has a long-standing and deep commitment to giving back to our communities through pro bono legal services, and it is one of the largest providers of pro bono legal services globally. www.dlapiper.com
​